12/09/10 On Monday, the newest campaign to market our community was unveiled. The Wheel of Progress campaign is now beginning to take off after several local stakeholders decided to join together to formulate a brand for the city.

One of the first steps in the campaign was a community-wide survey that was distributed to the public for ten days in November. According to one of the organizers, Plymouth Schools Superintendent Dan Tyree, the survey was created to include the public’s opinion of what they feel Plymouth is known for now and what it could be known for in the future.

Tyree said, “The Wheel of Progress 2010 is being developed to attract people to the Plymouth area as residents, visitors or businesses.” Results from the survey included what the organizers are referring to as the top five “quality of life” areas of education, parks and recreation, medical facilities, churches, and sense of community and public services.”

Tyree said they received 300 competed surveys. He said, “We would have liked to have had more returned; but we were pleased with the quality of those returned.”

Tyree said several weeks ago he was reviewing the website of the Plymouth Schools to look for areas of improvement and change. He said, “I looked at other websites in the community and found that information in them was outdated, misleading and contained some inaccurate information.” At that point, he decided to seek the ideas of other local stakeholders.

Tyree said, “It was clear that Plymouth did not have a brand.” He added, “Before you can market a community, you have to have a brand.”

The group commissioned the services of local marketing company, The Midas Center, to help create the survey and subsequently an image for the campaign.

They chose the Wheel of Progress to represent all of the needed entities in the community. Tyree said the axle of the wheel is the very core of Plymouth and the spokes are all of the different organizations. He said, “The outside resents the community as a whole.”

After the results of the surveys were reviewed, Tyree said there was a consensus by the pubic that they want to see Plymouth progress while maintaining the quality of life that exists here. He said, “There is definitely a desire to attract young professionals, technology, broadband, and the creation of new jobs.”

He said, “We now have some direction.”

Andrea Cook of The Midas Center said, “Plymouth is more than being a Pilgrim and standing at the first rock our forefathers found when arriving to this land. Plymouth is about the journey. A journey with generations of families who have been committed to hard work and sacrifice. A place of classic quality made of the people who live, work and visit making their mark along the way.We invite you, to “Join Us in the Journey.” 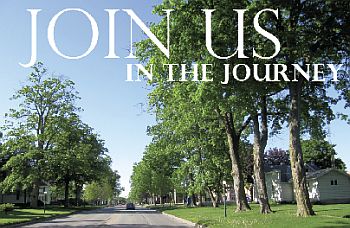 The next phase of the campaign is scheduled to begin in March of next year.