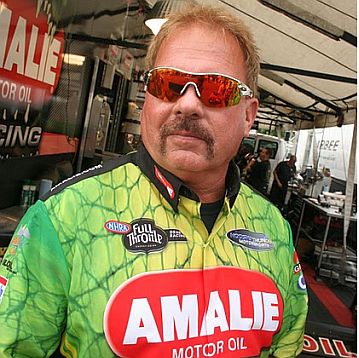 The University of Northwestern Ohio is located in Lima Ohio and grants master’s, baccalaureate and associate degrees through their Colleges of Technologies, Business, and Distance Learning. The College of Technologies has a storied racing history with its involvement in ARCA, NASCAR, NASCAR Whelen Modified Tour, the UNOH Perfect Storm 150 contested at the Bristol Motor Speedway and the UNOH Southern Slam 150 at Charlotte Motor Speedway. Now UNOH joins McMillen on the NHRA tour to add drag racing to its list of racing involvement.

McMillen is excited to introduce UNOH to NHRA Drag Racing fans. “This is more than a sponsorship,” McMillen explains. “It’s a very unique partnership that not only involves marketing and recruiting for the University of Northwestern Ohio but also a close business partnership with our race team and Amalie Oil.”

University of Northwestern Ohio President, Dr. Jeffrey A. Jarvis, is extremely pleased to extend UNOH’s involvement in the racing industry to include drag racing. Jarvis states, “Having the chance to partner with Terry McMillen’s Hoosier Thunder Motorsports will not only increase the exposure of our university to a broader audience, it will also provide an outstanding opportunity for our high performance students to gain real-world training in the drag racing field.”

As part of the partnership, Amalie Oil will become the official oil of UNOH and provide various sponsorships and support of Limaland Motorsports Park, a university owned and operated racing facility.

Both Amalie Oil and McMillen’s Hoosier Thunder Motorsports will set up a scholarship fund for incoming students interested in High Performance Motorsports. Hoosier Thunder will also provide an internship for a student who will get hands-on experience at the team’s Indiana race shop. McMillen’s team will also add Marla Weidenaar, a UNOH High Performance Motorsports graduate, to its full-season pit crew.

A recent tour of UNOH left McMillen impressed. “The 7-acre Jeff Jarvis High Performance Motorsports Complex is an outstanding facility. They say it’s the only one of its kind in the world and I agree. The training and education that students get at UNOH is impressive. It’s no wonder so many of their graduates end up in the racing industry.”

McMillen has been a proponent for the youth movement in drag racing and has personally sponsored and mentored junior drag racers in the past. He sees the UNOH partnership as an extension of that commitment.

“If you look at our crew, we’re a young team,” McMillen said. “There’s a real shortage of quality, young technical specialists and young crew chiefs in drag racing. We want to help promote youth in the motorsports industry and UNOH provides us with a very talented pool to choose from.”