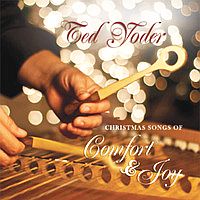 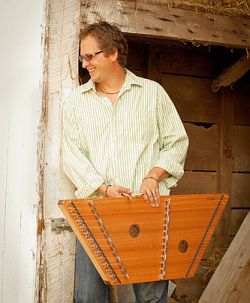 Ted grew up in a small town in Indiana and learned at an early age how to please a crowd, singing 4 part harmonies with his parents and 5 siblings. The love of performing was deeply embedded through those experiences and today Ted still loves to sing an occasional folk song in his concerts. Ted naturally progressed from singing and piano lessons in childhood to keyboards and drum programming in his teenage years. When he was married in 1997, Ted and his wife, Donna, were already dreaming of purchasing a hammered dulcimer, so when his in-laws gave them the money as a wedding gift they were ecstatic! 13 years later Ted and Donna find themselves busy with 6 wonderful children, ages 12 to 2 years, and 2 very large and beautiful dulcimers.
Ted’s debut album, an EP titled “Hymns” released in July 2009 and already he has independently released his second album, an EP of acoustic songs titled “Songs From Walnut Valley”. It features songs that Ted performed in competition for the title of National Grand Champion in Winfield, Kansas. Most of the songs on this CD were composed by Ted, exclusively for performance on the hammer dulcimer, and this recording really shows the sparkle of Ted’s musical expression. Now Ted is about to release his first full length CD- an album of Christmas music- in December.