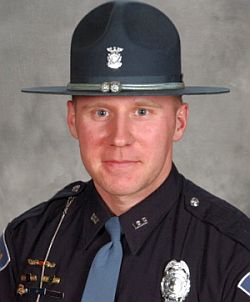 The idea for this event was conceived by Indiana State Police Superintendent Paul Whitesell, Ph.D. in 2006.  Superintendent Whitesell felt the need to publicly recognize the achievements and deeds of self sacrifice, and accomplishment that all too often go without the proper recognition.

Indiana State Police Senior Trooper Ryan Lebo, who is assigned to the Bremen Post, was one of the officers recognized.  He was presented with a Life Saving Award for his heroic action in December of 2008.  Lebo, an 11 year veteran of the department, and a 9 year member of the Indiana State Police Underwater Search and Rescue Team (USRT), put his skills to the test when he pulled Gayton Marks, 35, of Niles, Michigan out the flood swollen Yellow River.

Marks had been kayaking and hunting geese along the Yellow River when he encountered strong currents and a large debris field that eventually caused his kayak to flip, throwing him into 35-degree water.  Marks eventually let go of his kayak and floated downstream but also lost his life jacket that was in the kayak.  Lebo responded to the scene and was secured to a line that was held by a member of the Marshall County dive team.  Trooper Lebo swam downstream into the rushing river until he was able to reach Marks who was holding onto a tree branch in water up to his armpits.  Lebo recounted that Mr. Marks told him that he was very thankful that he made it to him.  Marks explained that he did not know how much longer he was going to able to hold on because he was so cold.  Lebo secured Mr. Marks next to him and held onto him as they were both towed across the flooded river to awaiting fire personnel.