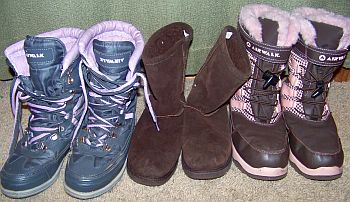 12/06/10 Eight years ago, Plymouth Police Department Cpl. Bridget (Strong) Hite set out to do two things. The first was to gather needed items for the children in the community who lacked the necessary winter protection and second, to show the community that the police are there to serve wherever they can. As she drove around town on patrol, Hite noticed day after day that kids were walking and standing on snow covered sidewalks with nothing but wet shoes on.

Now, the Boots for the Bus Stop project collects and distributes some 200 pairs of snow boots to kids in the community every year.

Hite said, “It’s always better to interact with people with a positive, rather than with a negative.”

For many years, the snow boots that were collected were given out from the Marshall County Neighborhood Center. Hite said it worked out okay, but then they began getting more and more requests from the social workers at the schools. Hite said, “For the past three or four years, we have been getting lists of sizes that are needed from the schools making it easier to know we are getting the exact boots that are needed.”

Hite gets support from all of the police department personnel and said she is especially grateful to Patrolman Jason Dobbins for his help in picking up boots, shopping, and raising the funds to keep the project going. Dobbins said he knows the need is great. He said, “Many, many parents just don’t have the means on limited incomes to buy snow boots.”

Hite said they are also extremely grateful for the support of local businesses that either give monetary gifts or purchase snow boots. She said, “We partner with stores in the shopping centers who give us discounts so our money goes farther.” According to Hite, members of the Plymouth Moose Lodge have contributed financially every year and the Bellmart BP station has been a collection point from the beginning. She said, “WTCA AM 1050 always has a box for collections and helps us get the word out and The Pilot‘s coverage has been invaluable.”

Hite said it really hit home when she married her husband of four years, Stan Hite. She said, “I became a step mom of four and learned quickly how difficult it is get everyone ready for the freezing weather.”

Hite said, “This winter is particularly difficult because of the failing economy.” She added, “Some people who have helped us with donations in the past now find they are unable to buy for their own children.”

Hite said, “I’m asking for extra donations because the need is growing.”

Anyone wanting to donate to the project can drop off new or gently used boots at the police station on Washington Street. She said they will also gladly accept monetary donation as well.