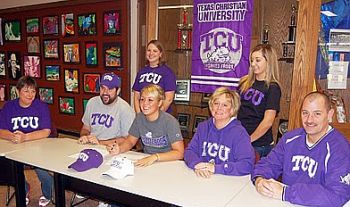 12/03/10 Plymouth High School swimming standout Kenzie Miller has made it official. She has signed a national letter of intent to continue her academic and athletic career at Texas Christian University.

Her storied career at Plymouth includes being an Indiana Swimming State Champion, IHSAA State Finalist, and a first Alternate for the AT&T Nationals. She is a six time Jr. National Qualifier, a two time record holder for the Northern Lakes Conference championship and a six time Sectional champion. She holds multiple pool records at area schools as well as being a multiple pool and school record holder at PHS.