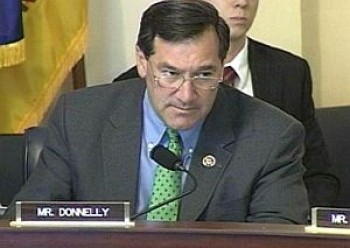 “When I voted against repeal in May, I did so because the Pentagon study group was still working on its assessment of the impact of a possible lifting of the ban,” said Donnelly.  “I said at the time that I wanted to be sure that repealing ‘don’t ask, don’t tell’ would not negatively impact military readiness, effectiveness, cohesion, recruiting and retention, or family readiness.  Today’s report confirms that repealing the current law can be done with little or no risk to any of these critical military objectives.

I have great respect for Secretary of Defense Robert Gates and Chairman of the Joint Chiefs of Staff Admiral Mike Mullen, each of whom have called for the repeal of ‘don’t ask, don’t tell.’  I also have great respect for anyone who wears the uniform and is willing to fight and die for our country.  Now that our military leaders have told us in very clear terms that repeal can be implemented without serious risk to military readiness, I think it is time for Congress to act.”

A Pentagon study group reviewing the repeal of the “don’t ask, don’t tell” policy released their final report this afternoon.  The report surveyed active-duty and reserve troops and military spouses and found that a large majority of respondents said the effect of repealing the current policy would be positive, mixed, or nonexistent; and outlined a plan by which the military could smoothly end enforcement of the ban.  In order for the current policy to change, Congress would have to pass legislation lifting the ban.  Both Secretary Gates and Chairman of the Joint Chiefs of Staff Admiral Mullen will be testifying in front of Congress in support of repeal later this week.  To read the report, click here.