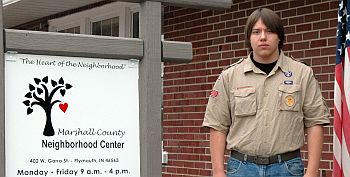 12/01/10  When Sarah Hendrix, executive director of Marshall County Neighborhood Center, was approached by Boy Scout Corey Celmer about doing his Eagle Scout project, she was happy and relieved. Hendrix said, “The outside of the center had been somewhat neglected and the shrubs and plants had gone way beyond their usefulness.”

But, after the three month project was completed, she was absolutely amazed at the extent to which Celmer and his crew had improved the exterior. Hendrix said, “I expected a few plants here and there, but never imagined that they would furnish as new sign, paint window frames and doors-and even replace a door that was warped.” The extent of the work will be more noticeable in the spring when the plantings will be growing.

Celmer, who also volunteers regularly at the Center, said he is grateful to his friends, scout leaders, and family members that helped to complete the project. He said, “The Neighborhood Center is a place that helps a lot of people and I wanted to help them, but I never couldn’t have done it without assistance.”

The coordination of the entire project was an integral part of the requirements. Celmer said, “At the end of the project, I have to demonstrate that I applied what I learned in scouts and also demonstrate leadership.”

At each step, Celmer had to seek donations, schedule work times, contact and confirm crews, and oversee the quality of the work.

Celmer wisely used the resources of the community as well. For instance, he was able to obtain a new door and the Restore facility and tap into the experience of local builders.

Celmer is a member of Troop #257 and has been in scouting since first grade. His father, Robert, is the scout master and his brother obtained Eagle Scout last year. Mother Stacy and sisters Jessica and Autumn continue to lend a hand whenever needed.

Service to others is not new to Celmer. He said, “Our family joined together first to help my brother Robert complete his Eagle Scout project before worrying about mine.” The Plymouth High School senior works to fund his projects by repairing instruments at Lutier.

Celmer has until his eighteenth birthday to finish all of his needed badges to be bestowed an Eagle Scout. Work must be completed by April 18.