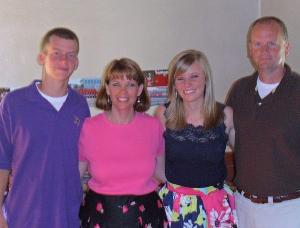 11/24/10 Nineteen-year-old Eric Day and his family will be celebrating Thanksgiving with a renewed sense of how much family, friends and a caring community truly mean. After an ordeal that started the weekend before Halloween that escalated into two brain surgeries, days in intensive care, and rigorous physical therapy, Eric is finally home.

Eric had come home from Indiana State College where he is a freshman to pick up a suit for an interview. His parents were in Washington, D.C. visiting his sister Katie who was on an internship from Butler University. When he began not feeling well and experiencing a severe headache, Eric stayed in bed for most of the weekend.

Ron and Lori Day found him in bed when they returned on Monday and had him seen locally for medical treatment with Dr. Joe Binit. When Dr. Binit reviewed the results of a precautionary CT scan, he immediately made arrangements to have him seen by a specialist in South Bend.

Katie Day said, “Most of our family met Eric there-grandparents, aunts, uncles, and even cousins.” 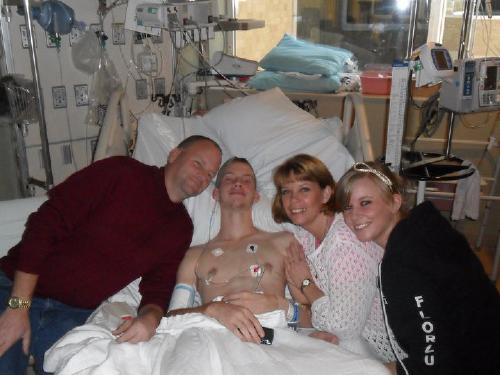 Katie said her parents called her to tell her the bad news that the doctors had found a mass in her brother’s brain that they thought was a colloid cyst. Katie said, “I was just getting on the metro and seven stops later, I realized what mom had said.” “I began loosing it and just wanted to buy a plane ticket and get home.”

The surgeons in South Bend referred Eric to a hospital in Indianapolis for surgery. Although the plan was to have him flown to Indy, tornado warnings grounded the flight and Eric was transported by ambulance.

Surgeons at the Indianapolis center confirmed the seriousness of the situation Katie said,” They said they were 95 percent sure it was a colloid cyst, but added that it was acting like a cork to stop the flow of spinal fluid.” She added, they said he needed surgery within a few days or he would go to sleep and never wakeup. That’s when we all realized the magnitude of the situation.”

Katie said she and her dad walked and cried while Eric was in surgery. The words of the surgeon afterwards brought an even greater sense of panic. The surgeon said the mass was actually a tumor and they had only been able to remove 60 to 70 percent of it. 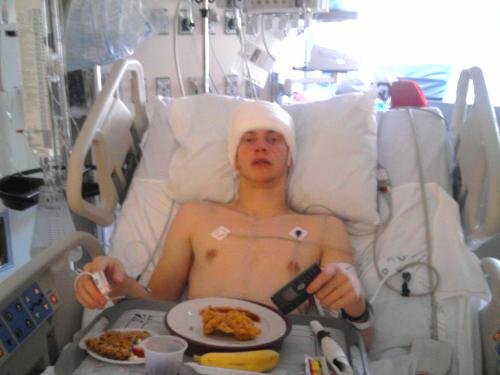 Katie said,” We all just kind of parted to deal with the news in our own way. But later we
realized that we had all heard something different.”

At that point, the entire family then started coming together, making a list of common questions, and rotating sitting by his side in the intensive care unit. Things went from bad to worse. Eric had either a seizure or a stroke and then got pneumonia. Katie said,” It was so hard to see the nurses poking him and knowing he was in so much pain.”

A second surgery was performed to put a permanent shunt in to allow drainage.

Surprisingly, Eric began communicating by writing. Katie said, “He wrote 20 times that he loved me”. More remarkably, Eric contracted no more infections and was able to breathe on his own. By Sunday he was transferred to a regular room, responded beyond everyone’s expectations with physical therapy and was able to come home last Wednesday.

Katie was able to pull off a surprise for her brother before leaving Indianapolis. Eric said he would like to meet a Butler football player, but Katie did one better and Butler Head Coach Brad Stevens met with him instead. Katie said, as it turned out, Steven’s cousin is the one who read Eric’s x-rays. 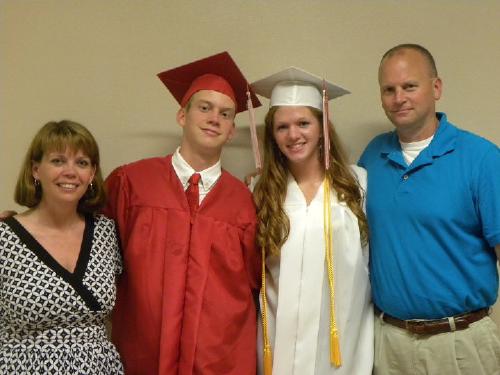 Although someone has to be with Eric around the clock, his family is thrilled to have him home and in his own bed. Eric lost 40 pounds during his time in treatment but has gained14 pounds back already.

Ron Day is helping with the physical therapy to help Eric regain his strength.

Eric has an appointment on December 6 to determine when he can return to college.

Katie will assume fulltime caregiver duties until January 8 when she returns to her own
classes. This will allow Lori Day to return to her librarian position at Lincoln Junior High.

Katie said, “We don’t realize how great our family is until tragedy strikes.” “We are so thankful to live in a community where people treat us like family.”‘ she said.

According to Katie, there were 10,000 hits on a website called “caring bridge” that carried the progress of Eric’s recovery.

Katie said, “It made me think about the benefits of living in a small town. People have gone above and beyond generous.”

The family has set up a daily routine for Eric including two hours each evening for visitors.

But most thankful is Eric himself. He said, “I’m really thankful for all the support and the prayers. I want to thank Mike Sheetz for coming to see me.  Also my family has been behind me and I love and appreciate them.”