11/23/10 Macy’s Thanksgiving Day Parade kicks off the holidays with unparalleled pomp and pageantry.

The scale of the Macy’s Thanksgiving Day Parade is immense: more than 3.5 million people view the parade live along the parade route, and more than 50 million viewers tune in to the television broadcast. Spectators watch in awe as 10,000 participants — including the nation’s best marching bands, performance groups, giant helium balloons, breathtaking floats and the one-and-only Santa Claus — pass before their eyes. 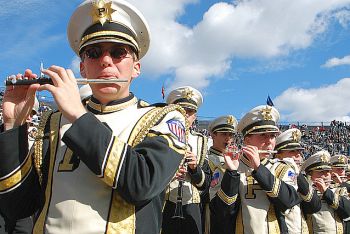 Each year, top marching bands of all varieties from across the country are invited to represent their states in the annual parade. In addition, the Macy’s Great American Marching Band returns to the parade route this November with more than 250 participants representing all 50 states.

Band directors were invited to submit an application along with a DVD of a field marching performance to the Macy’s Band Selection Committee. Applicants were thoroughly reviewed and decisions were made in early May, approximately 18 months in advance of their appearance. 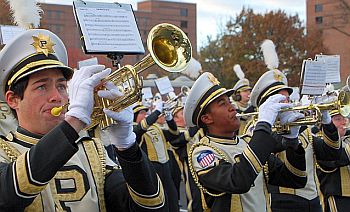 The Purdue University All American Marching Band from West Lafayette will be marching in the Macy’s Thanksgiving Day Parade.  Folks from Marshall County are invited to tune in a watch several young men and women from the area who will be in Purdue’s band. Purdue Band members who graduated from PHS are Mae Christiansen, Doug Booth, Zack Heet, and Stephen Boener.   Adrienne Erickson from Tippecanoe is also a marching member.