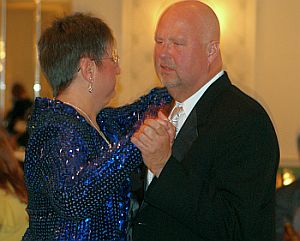 Mayor Mark welcomed the over 100 people in attendance and spoke briefly on this year’s beneficiary, The Heminger House Women and Children’s Shelter.  He said the dream of a shelter in Marshall County became a reality on September 11, 2008 when the ribbon was cut for the new facility.  The mayor continued by commenting that the shelter has never been empty in the 2 years and 2 months that it has been open.

Following a delightful dinner of salad, prime rib, twice baked potatoes, and broccoli and cheese guests were told about the Heminger House Shelter.

Laura Mann, a member of the Board of Directors for the shelter said, “Our primary goal is to address the issue of domestic violence and to give people a place to go for help, for answers, for protection and prevention.” 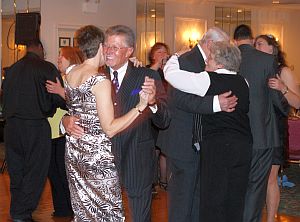 Since opening in September 2008 the Shelter has helped 281 women and children leave abusive homes so that they can begin to live independently, safely, and happily.

Ms. Mann explained that the dream of a shelter for Marshall County began 12 years ago when she and Director of the Housing Authority, Dean Byers were discussing why we didn’t have one.  A survey completed found 32 women and children could have benefited from the shelter during a 6 month period.  She explained that those families were homeless; sleeping in their cars, on the couch of a friend or in a spare bedroom of a family member.

The idea of the Heminger House was presented to Mann by local architect Brent Martin.  On her first visit to the property she saw her first ever cockroach.  It was hard to imagine that a tenement building could be transformed into a shelter for seven families.  Martin went to work with Mann and Byers securing local monies and a federal grant for the former roadhouse.

The Heminger House has operated with donation for two years.  They are now a United Way Agency but continue to need the full support of the community to continue to provide serviced to women and their children.

Ms. Mann closed by saying, “It is because of this community’s generosity that we are able to provide a safe place for women and their children.  We look forward to your continued support in the years to come so we can continue this important work.”

Anyone interested in donating to the Heminger House may do so by calling 936-SAFE (7233). They are in need of funding for programs, food, emergency clothing, monthly utility bills, staff salaries and more.

Following the beneficiary presentation everyone enjoyed the wonderful music of Dan Heath and the Paradise Band sponsored by U.S. Granules Corporation.