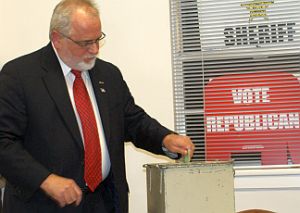 11/19/10 Thursday evening Republican Precinct Committeemen and women gathered at Republican headquarters for a caucus to select the person who will fill the remaining term of Commissioner Tom Chamberlin who has resigned his elected position effective at the end of the year.  Chamberlin will assume the duties of County Sheriff on January 1st, 2011. 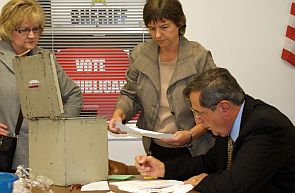 Each candidate was given two minutes to speak to the 18 precinct people gathered. Following the speeches the secret paper ballot was taken.  The results of the first ballot were Griewank 9, Compton 6, Hite 2, and Grolich 1.  Since the winner would need a majority of the votes a second ballot was taken with results of Griewank receiving 9, Compton had 8 and Hite had 1.  With no majority a third round a balloting happened.  The results were 9 for Griewank and 9 for Compton.

After three rounds of balloting County Chairman stepped to the front of the room and declared Greg Compton as the replacement Commissioner to fill the remaining two years of Tom Chamberlin’s term. 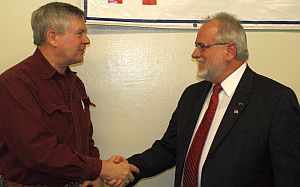 During his speech Compton did say that he was 1972 graduate of Plymouth High School and is the branch manager for Key Bank in Plymouth.  He said, he had good executive management skills and wouldn’t make the commissioner’s job a full time position, noting that it wasn’t intended to be full time.  He said the idea in selecting a commissioner was choosing experienced businesses and leaders from the community to provide their expertise.

Compton said, “I want to be held accountable.  I will be a team leader and a team builder but not a micro manager.”   He closed by saying, “I will fight for what is best for Marshall County.”