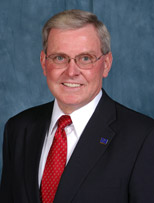 10/11/17  Tuesday marked Organization Day where all 100 members of the House, including 19 new State Representatives, were sworn in by Chief Justice Shepard.  In what has been described as one of the most difficult legislative sessions to come, State Representative Bill Friend (R-Macy) and his fellow House Republicans regained control of the House.

The newly elected Speaker of the House Brian C. Bosma pledged that he will do his duty and asks that all the Representatives do the same.

Rep. Bill Friend (R-Macy) was elected as the Floor Leader and nominated Rep. Bosma for Speaker of the House.

“It’s with great anticipation that I participate in organization day for the next General Assembly,” Said Rep. Friend. “I look forward to being the floor leader and working with the new representatives as well as the House Democrats.”

In September, the House Republican Caucus released their legislative plan, addressing Jobs, Education, Spending, and Standing Up to Washington, DC. At the time, Speaker Bosma also noted that he wanted to ‘reach across the aisle’ and ‘bring civility back to the house chamber. Today, Speaker Bosma reinforced the legislative plan, and the importance of working together for the future of Indiana.

“Our goal is to create good policy by means of good government,” said Rep. Friend. “I am going to spend plenty of time on developing a balanced budget without raising taxes that serves the needs of the people of Indiana House District 23.”