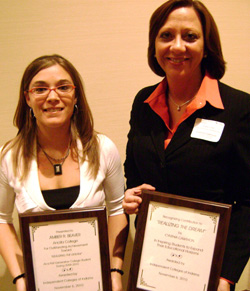 11/11/10  Ancilla College’s Amber Beaver was one of 31 students from Indiana’s independent colleges and universities who were recently celebrated at the Independent Colleges of Indiana’s (ICI) “Realizing the Dream” banquet.

Beaver, a sophomore from Argos majoring in both Criminal Justice and Behavioral Science, was selected as Ancilla College’s “Outstanding First-Generation Student”.

Cynthia Cawthon, Instructor of English, was chosen by Beaver as her “most influential” teacher and attended the banquet with her.

Made possible by a grant from Lilly Endowment Inc. to ICI, the event recognizes first-generation students attending ICI campuses, along with their inspirational teachers and families.

The year’s banquet was held at the Hilton Indianapolis North.

Each honored student received a $2,000 check to help with college costs, and each student’s chosen “most influential” teacher received $1,000.

One out of every three students on ICI campuses is a first-generation one, with the average family income of students attending one of Indiana’s independent colleges approximately $3,500 less than that of their peers at public four-year colleges. Generous financial aid provided by the campuses themselves, combined with state and federal grants, makes a private college education a possibility for all students in Indiana.

“We are so grateful to Lilly Endowment Inc. for making it possible for us to honor these first-generation students,” says Richard L. Ludwick, president and CEO of Independent Colleges of Indiana. “ICI exists to provide higher-education opportunity and choice for all students, regardless of family background, so this event truly reflects and supports our mission. We are proud, as well, that because of the higher graduation rates of our ICI colleges and universities, these students are twice as likely to realize the dream of completing their degrees in four years.”

ICI is a nonprofit corporation that represents the state’s 31 nonprofit accredited colleges and universities. ICI member institutions enroll some 87,000 students (approximately 22 percent of all students statewide) and annually produce 35 percent of all bachelor’s degrees in Indiana.