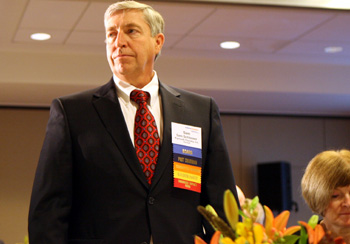 11/11/10 Tuesday afternoon during a luncheon in Indianapolis the Indiana Chamber of Commerce renamed their Volunteer of the year award in honor of Sam Schlosser of Plymouth.

When looking at Sam Schlosser’s volunteer service to the Indiana Chamber of Commerce over the last 20-plus years, the list of areas in which he has not been involved is noticeably smaller than those in which he has made a lasting impact.

Sam joined the family business, Plymouth Foundry, in 1974 and has served as president since 1984. A dedicated member (and often leader) of numerous public policy committees over the years, Sam served as chairman of the Indiana Chamber of Commerce board of directors in 2005. He has long been actively involved in the Indiana Business for Responsive Government political action committee and currently serves as co-chair of that group.

A Volunteer of the Year honoree in 2003, Sam has been annually considered for repeat recognition in that category. He has logged many miles driving U.S. 31 between Plymouth and Indianapolis, and assisted in numerous ways no matter the need or project.

In recognition of his service and contributions, outstanding Indiana Chamber volunteers from today forward will be recipients of the Samuel C. Schlosser Volunteer of the Year award.