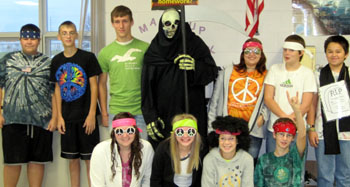 11/03/10 Thursday, October 28th, the Grim Reaper roamed the halls of Argos Jr.-Sr. High School looking for victims of drug and alcohol abuse.  Three different groups of students fell victim to the Grim Reaper as a result of fictional scenarios where others caused the deaths of Argos students due to drug or alcohol use during a drive home from an older sibling that had been under the influence of cocaine from an athletic awards banquet, during a three vehicle accident at the intersection of 31 and 10 caused by a 21 yr. old from Culver under the influence of alcohol and during a trip to the woods on a fall day when out of town hunters were recklessly shooting while under the influence of alcohol. 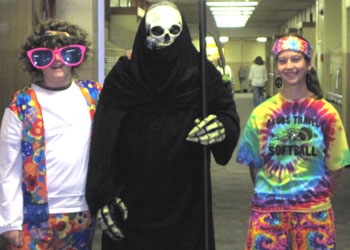 The Grim Reaper visited classrooms and found his victims.  Students were shrouded in a black shawl, given a RIP tombstone with their information on it to wear around their necks, and instructed to not speak for the remainder of the day.  In all, twenty students were lost to an early death due to the irresponsible use of drugs and/or alcohol by other individuals.

This activity along with the showing of the video “They Lied” were the focus of this special Red Ribbon Week.  Senior Kaleb Hall organized this week as his Senior Project and included discussion questions about both activities and a poster competition by Activity Periods that challenged the students to use creativity to show the key points of this graphic video.  Students also competed daily along with the elementary school to show school spirit by dressing in daily themes.