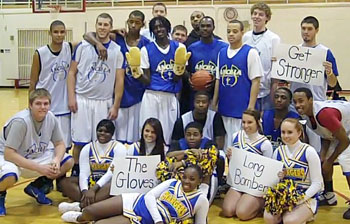 The event, which took place at Plymouth High School, combines fiscal strategy and actual basketball play.  Its main purpose is to provide an entertaining physical experience while learning about managing money.

Teams earned money by selecting sacrifices and lost money (credit) by acquiring power-ups.  Examples of sacrifices and power-ups included free dunks, picking a kid out of the stands to join play, and wearing oven mitts for a quarter.

Each team’s “BudgetBucks” balance was kept, and teams with a positive BudgetBuck balance added it to their score at the end of the game.

Photo: Members of the Ancilla College men’s basketball and cheer teams pose together during “BudgetBall”, an event sponsored by United Way.