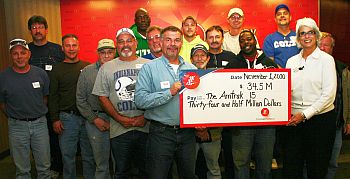 11/02/10 A group of co-workers at the Amtrak facility in Beech Grove are doing some serious celebrating Monday night.  A group calling themselves the  Amtrak 15 claimed the $34.5 million Hoosier Lotto jackpot from the Saturday, October 30 drawing.  They arrived at Hoosier Lottery Headquarters in Indianapolis by limo Monday afternoon to claim the third largest jackpot in the game’s history.

The history-making group are regular Hoosier Lotto players who each pitch in $4 a week for Hoosier Lotto and Powerball® with Power Play®.  They are all from the Central Indiana-area. The lucky Amtrak 15 winners are Steve Cupp, Steve Johnson, Jack Dorris, Gene Riley, Johnny Holmes, Robert Gillen, John McCutcheon, Henry Jones, Kurt Whetsel, Patrick Kavanaugh, all of  Indianapolis, and Patrick O’Farrell of Greenwood, Lance Jessup of Anderson, Gilbert Ham Jr. of Martinsville, Melvin Griffith of Mooresville and Derrick Shryock of Trafalgar.

Most of the men are machinists, but the group also includes an electrician, a pipefitter and a supervisor.  The youngest of the group is Lance Jessup who is 32.  At 60,  Jack Dorris is the oldest. Two of them are retirees who continue to play with their former co-workers.

Steve Cupp purchased the group’s tickets at Circle K at 10598 N. College Ave. in Indianapolis. John McCutcheon checks the tickets.  He discovered the win Sunday morning and called Steve who had warned him “not to call me unless it’s the big win!”

It was the big win.  It didn’t take long for rumors to start swirling all around the Amtrak facility. The guys knew it really was the big one when Steve showed up for work today at second shift in a limo.

“I always said if we win, you’ll know it because I’ll show up in a limo,” said Cupp.

The guys piled in and headed to Indianapolis to claim their winnings. Perhaps the luckiest of the group is Kurt Whetsel. He just joined the group last week and won after paying his first $4 contribution to the pool.

None of the men plan to retire. While all the men say they will continue to work, they will do so with a little weight off their shoulders.   Their plans for spending their winnings include mostly bill paying and taking care of their families.

Larger Hoosier Lotto jackpots have only been won twice:  in 1999 when David Pearson of Cloverdale, IN won $42 million and in 2007 when Peter Gilbert of East Chicago won $54.5 million.

The Hoosier Lottery reminds all players to play responsibly.