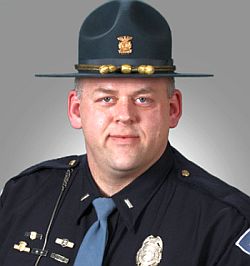 11/01/10 On Monday, October 18, 2010, Indiana State Police Superintendent Paul Whitesell, Ph.D., announced the promotion of Lieutenant Brad Weaver to the rank of Captain.  With his new promotion came a new assignment.  Weaver is now assigned to the Office of the Deputy Superintendent of Enforcement.  Weaver will serve as the Special Operations Commander for the Indiana State Police and be headquartered in Indianapolis.  Prior to his promotion, Weaver had served as the District Commander of the Bremen Post since 2004.

Weaver’s new duties will include supervision and command over the Indiana State Police Emergency Response Section (E.R.S.), and the Tactical Intervention Platoon (T.I.P.).  He will also be in charge of the many special details that the state police play a vital role in every year.  Some of the details include the Indianapolis 500, Brickyard 400, Indiana State Fair, and the Moto Grand Prix.  During his tenure as the Bremen District Lieutenant, Weaver helped organize several U.S. Presidential visits as well as local Notre Dame Football weekends.  Weaver will use his vast experience to organize the agency’s role in the many collegiate athletic events and dignitary protection details that it faces every year.  His duties will also involve him in the 2012 NFL Super Bowl that is to be held in Indianapolis.

A graduate of Southwood High School in Wabash County, Weaver holds a bachelor’s degree in accounting from Valparaiso University.  A 16-year veteran of the department Weaver started his career at the Indiana State Police Post in Peru where he was assigned road patrol duties in Fulton County.  In 2000 he was promoted to corporal to serve as a district duty officer at the Peru Post, until 2003 when he was promoted to sergeant and transferred to the Bremen Post to serve as a squad leader.  During his career, Weaver was certified as a Defensive Tactics Instructor and taught at several I.S.P. academy classes.  Weaver is also a Hostage Crisis Negotiator, Vehicle Crash Reconstructionist, and most recently the Statewide Commander of the Tactical Intervention Platoon.

Weaver and his wife, Keri, continue to reside in Fulton County with their three children Dylan, Elizabeth, and Landon.