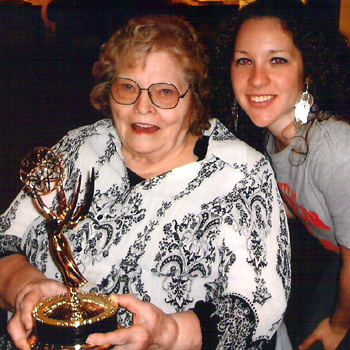 10/19/10 Argos High School graduate and Ball State University senior Colleen Walker visited her grandmother Cleta Walker at Miller’s Senior Living Community this week.  While that may not be unusual or newsworthy the item she brought to show her grandmother was pretty exciting.

Walker is a film production major at BSU. She had been at Argos High School earlier in the day to speak to the students about her experience of working on a documentary film during the last year in California.  Walker fulfilled her internship with Muse Entertainment and was part of a team who filmed the documentary “Increasing Your Odds: How To Start A Business”.

Since she was in the area she had to stop by and show Grandma Walker the Emmy she won for the documentary she helped film.  Each person on the film team received an Emmy.  When she took the Emmy out of the box she created quite a stir in the Miller’s lobby.  Everyone wanted to hold it to see how heavy it was.  They asked questions about it.  When asked where she keeps the Emmy in her home, Walker smiled and replied, “In the box.  I have cats they would wonder what it is and knock it off the shelf; so for right now I keep it in the box.”

Photo:  Cleta Walker proudly holds the Emmy her granddaughter, Colleen Walker won for her work on the documentary film “Increasing Your Odds.”