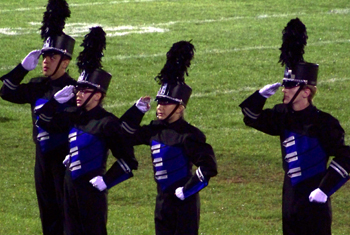 10/12/10 “The stars aligned and the great weather helped bring in record crowds during the 12th annual Harvest Festival of Bands Saturday evening” according to Jeff and Lenore Jones, P.H.S. Music Booster Supporters.

The boosters would like to extend their sincere appreciation to all the sponsors who placed ads in the programs and to the parents and all the volunteers. Jones said, “As a result, this year’s event was an outstanding success.” 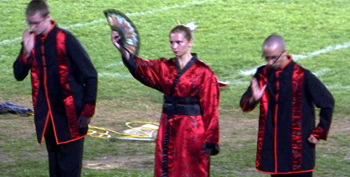 On Saturday 15 area high school bands converged on the High School grounds and spent many hours preparing for their performance on the field.  The first performances were the class C & D with class A & B in the final set.

Bands were judged on their musical performance, visual performance and general effects.  Typically there is a panel of six judges but at the Harvest Festival of Bands a total of 10 judges were used with the color guard, percussion, drum majors, and pit crew being added into the mix.

“The Pride of Plymouth” continues to have a very successful season under the direction of Bryan Ames, Director of P.H.S Bands, Lisa Wallyn, Assistant Director of Marching Bands, and Nicole Horner, Color Guard Director. 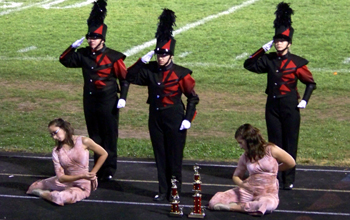 Saturday night the Pride of Plymouth did an exhibition at the conclusion of the class A & B presentations. Because they were the host band they did not actually compete in the festival.  The judges did score them and gave them a 73.30.

“Plymouth is fortunate to have great directors and a thriving music program,”according to Jeff Jones.

The band will travel to Lafayette Jefferson for the ISSMA Regional’s this Saturday.