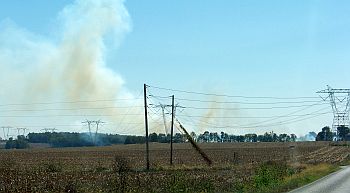 10/07/10 At 1:35 p.m. Wednesday the Plymouth Fire Department responded to a field fire at the intersection of Oliver Trail and 12th Road.  This fire started at just about the same time the Marshall County Commissioners issued a ban burn for the entire county.

It appeared that the fire began with a neighbor burning trash in a backyard. Apparently the winds caused the fire to spread into a corn field that had been harvested.  It only took a matter of minutes for the small blaze to get out of control.  The fire raged to the east towards a tree line and the Yellow River and southward towards 12th Road. 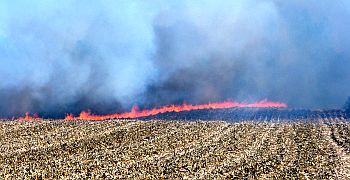 There was not extensive damage to the field since the corn had been harvested but the fire department did experience damage to one truck.  The 13 year old County truck lost its diesel fuel tank in route to the scene and had to be towed in from the scene. 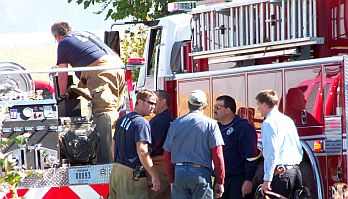