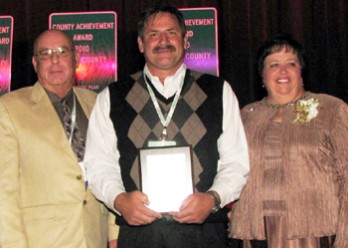 Neal Haeck began with the Marshall County Highway Department in 1981 as a Township Leader, becoming Assistant Superintendent in 1987; he was appointed Superintendent in 1993. During his tenure, he has overseen construction of a new county garage and three open sheds. He supervised the “heated floor” patch shed concept, enabling the highway to patch holes in the winter time. Haeck excels at managing his budgets during these difficult economic times, often finding innovative ways to stretch dollars. When salt supplies were scarce in 2009 he was one of the first in the area to utilize the process of spraying calcium chloride on sand and applying it to icy and snowy roads. 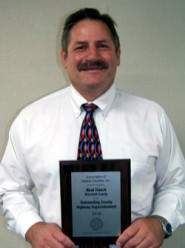 The award was presented during the AIC’s Annual Conference, the largest gathering of county officials in the state. The four day conference included 10 different workshops, and breakout sessions that were designed specifically for each county office. County officials also had informal opportunities to discuss issues with their colleagues from other areas of the state. Officials met in LaPorte County to discuss and offer solutions for issues facing local governments. Representatives from public agencies, private entities, universities and local elected officials addressed such issues as: government modernization, road funding challenges, court reorganization, federal health care reform and its effects on county government, how to do more with less in the wake of shrinking government funding sources, etc.

The Association of Indiana Counties, Inc. is a nonprofit organization established in 1957 for the betterment of county government. The various functions of the AIC include lobbying the Indiana General Assembly on behalf of counties, serving as liaison among counties, state and federal agencies as well as providing technical assistance and training to county officials and employees.