Reward for Vandalism at Oak Hill Cemetery Grows to $5,000 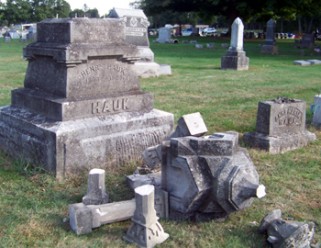 10/04/10 Friday afternoon Plymouth Mayor Mark Senter and Cemetery Superintendent Jim Ousnamer along with Plymouth Police Chief Jim Cox and Investigator Ted Brown held a press conference to announced a substantial increase to the reward fund for information that leads to the arrest and conviction of the person or persons involved in last week’s vandalism of Oak Hill Cemetery.

Police Chief Jim Cox stated the time line for the incident. Workers were at the cemetery on Saturday until 5 p.m. and returned Sunday at 9 a.m. finding 110 grave markers damaged. They were there on Sunday in preparation for the Tri Kappa History Walk.

Ousnamer said the stones were from the 1860’s to 1930’s. Most of the damage was repaired within two days with the help of several city workers but about two dozen were too severely damaged to be fixed. Damage is estimated at over $100,000.

Police had the junior high, intermediate and high school announce information of the reward money during the daily announcements on Thursday and Friday. Brown said they had received 9 tips and had spent Friday afternoon following up on the tips at the high school. He did mention that the suspects are probably high school students or kids recently graduated. One or two of the tipsters said the number of those involved could be as high as 7 or 8.

Mayor Senter was an investigator for the Indiana State Police for a number of years. He said, “As a former investigator I know about motives and every crime has a motive but I don’t understand this motive.” He continued, “This is a part of our history, our ancestry and part of Plymouth’s history.

Ousnamer said the word has gotten out about the vandalism. He has received calls from as far away as Colorado and Alaska from concerned family members are calling to see if their family’s markers were involved.

Investigator Brown said he and Detective Leo Mangus are working the case. He said, “Everywhere I go people want to know where we are on this crime. It has obviously affected a lot of people. We need the public’s help and we hope one of these tips will lead somewhere.”