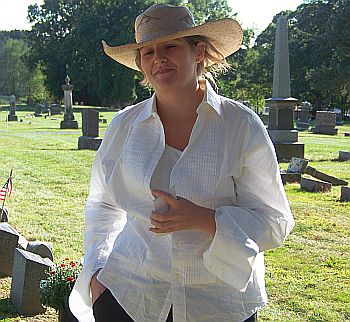 09/27/10 The third bi-annual Oak Hill Cemetery History Walk created by Tri Kappa was held Sunday afternoon amidst an era of distress. Several committee members were in the cemetery about noon and surveyed the damage that had happened overnight. Apparently several subjects tipped over, pushed off their foundations and actually broke dozens of headstones in the oldest section of the cemetery.
Although members were quite upset with what had happened, their special performance went on as scheduled. Six soles who are buried in Oak Hill Cemetery and helped shape the beginnings of Plymouth were raised from the dead to tell their stories.
Cyrus Taber (1833-1877) was the first white child born in Marshall County. He was portrayed by Christina Green a speech and drama student from PHS. Cyrus was quite proud of his financial status and bragged to those in attendance. He had 184 acres, cash and personal property valued at over $16,000. In today’s finances his estate would have been worth over $3,6 million. 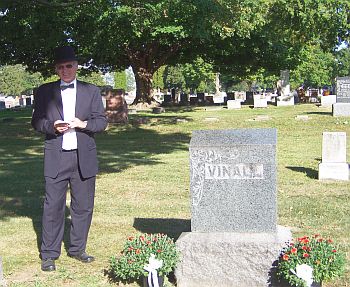 Julius Vinall (1855-1936) was a downtown general store owner. He was portrayed by his ancestor Jim Vinall. His father was the first homeopathic doctor to hang out his shingle in Plymouth. As a youngster he experienced the death of his sister and brother within weeks of each other. Julius operated a grocery store at 217 North Michigan Street where Xaver Cleaners is now. The store was the social gathering place for the community. 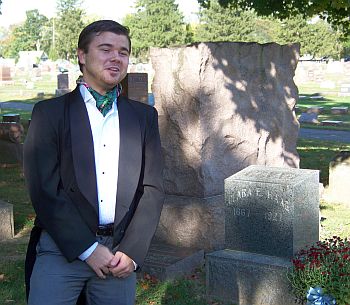 Earnest Haag (1866-1933) was owner of “The Mighty Haag Show Circus.” He was portrayed by John Patrick. As the age of 12 Earnest ran away from home in Kewana and started his own business giving shows for $.10 each. He traveled to the east coast and worked selling newspapers and polishing shoes before he started playing in an orchestra. He began acquiring the necessities for a circus and created a circus which traveled the country from east to west and north to south. His last show was in Plymouth in 1915. That day it was raining and everyone thought the circus would be rained out but Mr. Haag said “the show must go on” and it did. Although he didn’t spend much time in Plymouth he said it always had a special place in his heart. 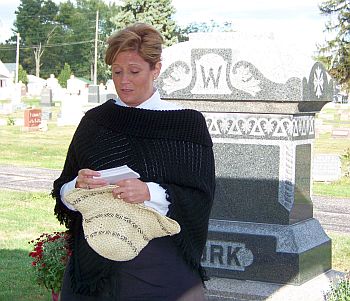 Julia Work (1845-1932) was owner of the Brightside Orphanage/Julie E Works Training Academy. She was portrayed by Mandy Metsker. Ms. Work was born on the family farm which was north of Plymouth where Christo’s Family Dining now sits. At the age of 18 she married Hyrum. They had 5 children and in 1880 moved to Mishawaka where she became the director of an orphan’s home. Five years later her husband left her. She left Mishawaka under controversy and opened a children’s home in LaPorte and eventually ended up opening Brightside. In 1917 the school house burned and was rebuilt within a year at a cost of $3,800. In 1918 she was sued by three banks for non-payment of loans and in 1919 the County charged her for the poor living conditions of the home and the bad treatment of the children living there. In 1919 Julia moved to Malibu, Californian and died there. She was cremated and her ashes were buried in Oak Hill Cemetery. The orphanage was part of the orphan’s train and many of the children were taken across the Mississippi for adoption. 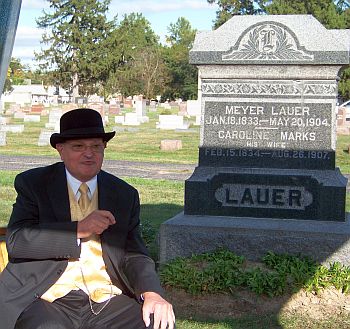 Meyer Lauer (1833-1904) was owner of Lauer’s Clothing Store and one of the first Jewish settlers in Plymouth. He was portrayed by Mike Berman. He told the tour group he was a quiet and unassuming man and a fine merchant who was born in Germany and immigrated to the United States at the age of 19. He worked as a cabinet maker in New York City and then in Cincinnati. He and his brother decided cabinet making weren’t for them and they became traveling merchants, not as peddlers. A fire that destroyed nearly 4/5’s of the downtown business caused the brothers to come to Plymouth since commerce was almost completely wiped out. In 1861 they opened their store on the east side of Michigan Street and shortly after in the location on the southwest corner of Garro and Michigan Street. In 1881 the brothers had a falling out and Meyer’s brother Levi went to work for the competitor in town. 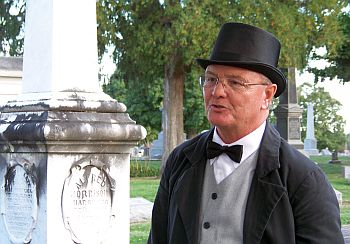 The final stop on the history tour was Alfred Morrison (1836-1901) a civil war soldier that also constructed the railroad line from Fort Wayne to Chicago. He was portrayed by Rev Larry Marhanka. Alfred’s first real job was working the Pennsylvania line from Fort Wayne to Chicago. He actually worked on the line helping to lay the rail on the tie and making sure the spikes were secure. When the Civil War broke out he became a Lt. of Light Artillery. Following the war he went back to work with the railroad. Mr. Morrison was on the first city council and helped build the city’s first town hall and fire department in the 200 block of Center Street. He also spoke of the brass pole that firemen would slide down that still exists in the Old Fire House where the Blueberry Festival office is located today.

The 3rd History Walk is a fundraiser for the Marshall County Historical Museum presented by Tri Kappa. Is was estimated that between 200 and 300 citizens attended the event.