Drive One 4 U R School Raised $5,720 for Plymouth Music Boosters 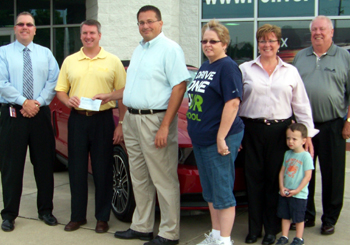 09/24/10 Thursday morning John Oliver and Jennifer Houin representing Oliver Ford Lincoln Mercury in Plymouth presented a check from the August 7th Drive One 4 U R School event to the Plymouth Music Boosters. The check from Ford Motor Company was in the amount of $5,720 representing 286 test drives.

This special fundraising event was granted to Oliver Ford for receiving their 10th Presidents Award from Ford Motor Company. Earlier in the summer Oliver Ford did a Drive One 4 U R School that benefited the Plymouth High School Sports Boosters. They were able to raise that maximum amount of $6,000 by having 300 people test drive a vehicle.

The August 7th event was combined with several other fundraisers that all took place on the PHS campus at the same time.

The students ran a car wash so everyone could get their car cleaned while they were driving Oliver Ford vehicles. The music boosters ran a bake sale and a Nelson’s Port-A-Pit chicken dinner and Oliver Ford provided a cruise vacation as an additional raffle fundraiser. The combination of the Drive One 4 U R School event, and all of the additional fundraisers raised nearly $12,000 for the music program in only a four hour time span!

There was even a short concert that day by the local rock band “DANG!”

Plymouth High School Band Director Bryan Ames said, “This event was one of the largest and most successful fundraising campaigns that the music boosters have organized. We can not express enough thanks to the staff at Oliver Ford for the wonderful support they have given the music program. Generous donations from community businesses like Oliver Ford are what will provide the students at Plymouth High School with the necessary funding to keep the music department running strong.”

Mr. Ames continued by saying, “What many people do not realize is that most of the programs in the music program are very much self-funded. The marching band is already a ‘pay-to-play’ type of activity because students have to pay membership fees to cover the numerous costs to fund the program. Support from community members, like Oliver Ford, are what allow our programs to continue to thrive and succeed in these times. Most people do not realize that these programs almost completely fund themselves financially and depend on community support to function.”