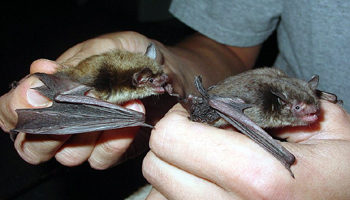 09/23/10 World Rabies Day is September 28, and state health officials are taking advantage of the opportunity to remind the public rabies is still a disease of concern.  Rabies is a virus that attacks the brain and nervous system of humans and other mammals.  It is transmitted through a bite, or very rarely, saliva entering a person’s mouth, nose, eyes, or open wound.  Rabies is almost 100 percent fatal.

In Indiana, bats are the animal of most concern for rabies.  Health officials have identified 21 bats this year that have tested positive for rabies in the state.  Since 2006, two people in Indiana have died from rabies.  Before 2006, Indiana had not had a human case of rabies in 50 years.

“Unfortunately, these deaths are a sad a reminder rabies is still a threat,” said Jennifer House, DVM, veterinary epidemiologist.

World Rabies Day has been set aside to promote rabies prevention.  It is estimated 55,000 people die worldwide from rabies each year.  Vaccination of domestic animals has greatly reduced the risk of rabies in the United States.

State health officials say canine strain rabies has been eliminated from the United States through vaccination and leash laws.  However, other strains of rabies are still present and risk of rabies transmission to pets from wildlife is always a possibility. Animals that are most likely to spread rabies are bats, raccoons, skunks, coyotes, and foxes.

“In addition to vaccinating their pets, people should also avoid contact with wildlife,” said Dr. House.  “Since rabies in Indiana is primarily found in bats, I urge people to take extra precautions to avoid exposure to bats.  The first step is to bat-proof your house. Second, don’t handle bats.”

According to the Centers for Disease Control and Prevention, rabies can only be confirmed in a laboratory.  But any bat that is active in the day, is not able to fly, or is found in a place where bats are usually not seen, and is very easy to approach, is far more likely to have rabies.  As a result, bats should never be handled.  Less than one percent of bats in the wild are rabid, but bites by bats are considered high risk.

“Anyone who has a bat exposure, or is bitten by another animal suspected of having rabies, should seek medical attention as soon as possible,” said Dr. House.  “If you believe your pet has been bitten, contact a veterinarian.”