Semis Collide when One Stops at Railroad Crossing 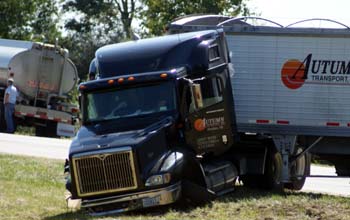 Monday afternoon about 2:45 traffic on US 31 was diverted of the highway for an accident on the railroad tracks between 13th and 14 Roads.

Marshall County Police Officer Nick Laffoon investigated the crash that involved two semis.  The accident occurred when the a 2007 International Semi driven by 60 year old Richard Webster of Illinois was south bound and failed to see a semi tanker stopped at the railroad.

Webster’s semi struck the back end of the tanker that was hauling flammable liquids driven by 53 year old Loren Bontrager of Nappanee.  Webster’s semi jackknifed after the initial impact and came to rest partially in the median.  HIs truck came to rest blocking the south bound lanes of US 31.

The fuel tanks on Webster’s semi did split open causing some diesel fuel to leak onto the roadway.  There was also a small grass fire from the crash. 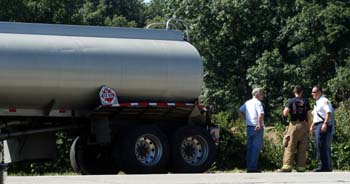 Webster was transported to Saint Joseph Regional Medical Center in Plymouth for treatment of his injuries.

Traffic on US 31 had to be diverted during the investigation and to allow time for the debris from the scene to be removed.