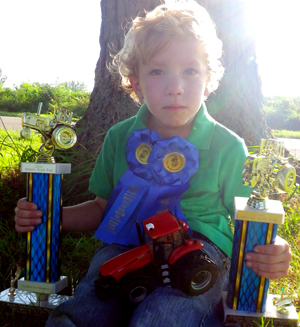 Sean placed first in his class and  moved on to compete against all first place winners from each local 4-H county fair. Winning the title ” Champion of Champions” .

Sean has been invited to compete at the “Champion of Champions” for the state of Michigan which will be held in Lawrence, Michigan on September 5th. He has also qualified to compete at the national champion competition scheduled at the Corn Palace in Mitchell, South Dakota on Sept 25th.

Sean loves to ride on real tractors, collect toy tractors, and can drive a skid-loader by himself.

He is the son of Jason and Tori Richard of Plymouth.