No Injuries in Crash at Michigan and Oak Hill 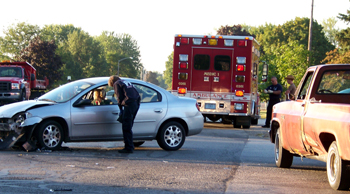 Plymouth Police responded to a two vehicle accident at the intersection of South Michigan Street and Oak Hill Avenue Friday morning at 7:46.

A 9-1-1 call to the County’s Dispatch Center sent Officer Ray West to the scene of the crash.  19 year old Chloe Clemons of Plymouth Goshen Trail told the officer she was a bound on Oak Hill Avenue waiting to turn left and head north on Michigan Road in a 2005 Dodge Neon.  She advised she was blinded by the sun and did not see the second vehicle.

The other driver, 18 year old Robert Boyd of Charles Street was west bound on Soice Street in a 1986 GMC Pickup Truck.  He had stopped at the intersection of Michigan and Soice in an attempt to cross Michigan onto Oak Hill. 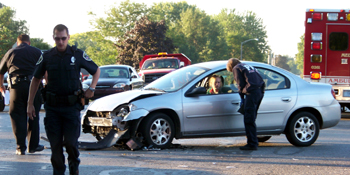 Boyd told Officer West that he had stopped and then started to cross the intersection when the two vehicles collided. Impact caused the pickup truck to spin 90 degrees.

A witness who was sitting east bound behind the Clemons’ vehicle said he was having trouble seeing due to the glare of the sun.

Neither driver was injured in the crash.