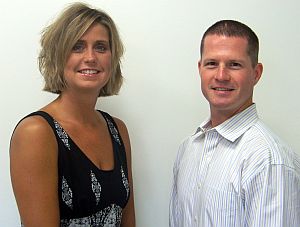 Melissa Owen, the 2010 Campaign Chair for the United Way of Marshall County is pleased to announce the appointment of Chad Dreibelbis as the Campaign Vice-Chair for 2010.  In announcing the appointment, Owen stated she was pleased that Chad accepted the position and was looking forward to working with him.  She commented further, “Chad has helped the United Way campaign many times wherever he has worked, and most especially as chair of the Bremen division last year.  He always sets a high bar of excellence and I know he will do the same for the entire campaign.”  In accepting the position, Chad will become the Campaign Chair in 2011.

In addition, Owen also announced the 2010 Campaign Goal of $450,000.  “This year’s goal is $30,000 more than we raised last year.  I believe it is possible with the outstanding cabinet members we will have working on the campaign this year.  Of course, this goal cannot be met without the amazing and unfailing generosity of our community.  The 2010 campaign marks the 50th anniversary of United Way in Marshall County.  With so many years of success behind us, I believe our 50th campaign can inspire all of us to give generously this year. ” Owen said.

Chad Dreibelbis graduated from Plymouth High School in 1990.  He earned a B.A. in Telecommunications from Indiana University in 1995.  He was born and raised in Marshall County.  Chad recalls spending many summers biking all over town with friends to play pick-up games of baseball or football followed by lunch and refreshments at many of Plymouth’s fine establishments.  “Marshall County is part of who I am.  We live in Plymouth and I have worked in either Bourbon or Bremen most of my career.  All of our communities give you a sense of belonging.  Jena and I love it here and can’t think of anywhere else we would rather raise our children,” he said.  Chad has served as the Director of Quality at Nello Corporation, in South Bend, Indiana since 2008.

Both Owen and Dreibelbis are graduates of Leadership Marshall County.  Dreibelbis is a member of St. Michael Catholic Church and the Knights of Columbus.  In addition, he also serves on the United Way Board of Directors and is President of the local Alumni Chapter of Sigma Chi Fraternity.  Chad resides in Plymouth with his wife Jena and their two children, Kendall and James.

Dreibelbis was pleased to accept the position.  “I feel fortunate to have the opportunity to make a difference in the community that I hold so dear and that has given me so much throughout my life,” he said.  “We are a giving community that has a responsibility to lift up and support our neighbors in times of need.  I am honored to work with Melissa, her team, and the citizens of Marshall County in a joint effort to help our community flourish.”