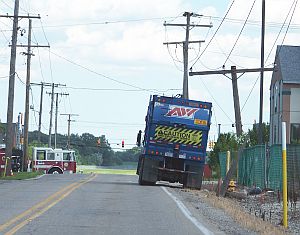 Plymouth firefighters responded to a traffic accident involving a garbage truck the struck a utility pole at 2:37 p.m. Monday afternoon.

An Allied Waste garbage truck was traveling east on Hoham Drive and struck a utility pole that was on the south side of the road next to the American Container parking lot.  The pole was totally snapped all though the electric lines were stretched and hanging between two standing poles.  Some of the lines were resting on the garbage truck.

The driver of the truck was not injured in the accident.

Traffic was stopped on Hoham between Michigan Street and Western Avenue.

NIPSCO was on the scene within a few minutes and had the road closed for several hours to repair the damage.