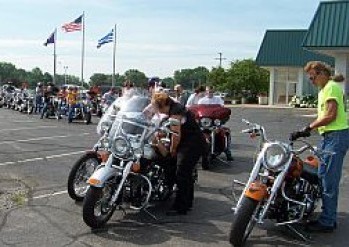 Early morning storms on Saturday may have kept a number of motorcycle riders from participating in the 9th annual United Way Ride, but the 60 riders who made the 60 mile trip couldn’t have wished for a better day.

Among the brave riders was 81 year-old Roberta Hostetler. She was a passenger on the back of a motorcycle driven by Marshall County Abate head Scott Leland. Also riding along side on her own motorcycle was Hostetler’s daughter Selene Foster. Leland said, “Roberta rides with us every year.”

Although the profits from entry fees and sale of auction items have gone toward the work of the United Way, this year’s proceeds were directed entirely to the Heminger House Shelter for Woman and Children.  The shelter opened in September 2008.  They haven’t had a single day when there wasn’t a client and family living in the house.

The annual ride was the brainchild of former United Way board member Cindy Rash.  Origionally designated as an awareness ride, this year it was decided to allow the Heminger House Shelter to partner with United Way and have all proceeds benefit the shelter.

Jennifer Maddox, executive director of United Way, was just one of those who enjoyed the ride from Plymouth to Bremen, Bourbon, Argos and back to the Mose Lodge in Plymouth. Maddox said, “The big thing about this ride is the support from the community.”

Maddox said this is the first year that they have partnered with an organization. She said, “Heminger House is just solidifying an ongoing financial support base and this was one way to help with that effort.” 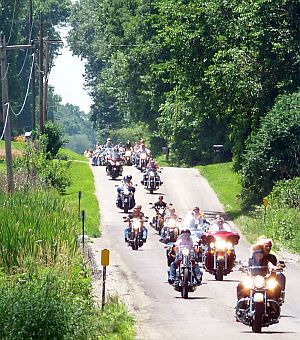 Maddox was especially pleased with the police escorts that they received in every town they visited. She called their contribution “outstanding”. She also praised the outpouring of welcome from the VFW in Bremen, the American Legion in Argos and the Moose where the travelers stopped for a rest time. The ride concluded with a meal donated by Papa’s Pizza, Ponderosa, and Kroger’s at the Moose Family Center in Plymouth. Hoosier Catering donated all of the paper products needed for the meal.

All of the volunteers for the event were working on behalf of the Heminger House. Annie Woijcik, director of the Heminger House, thanked local businesses and individuals who donated items for the silent auction and door prizes and worked tirelessly for several days to make the event a success. The amount of the proceeds will be released after final tabulation.

Laura Mann, Fundraising Chairman and Board Member for Heminger House said,  “I would love to thank everyone that had faith in the weather clearing up! The day turned out to be perfect for a ride. A big thanks to all of our sponsors, too. The continued support of the Heminger House is amazing. Everyone needs to mark their calendars for June 25, 2011 and come out and ride with us!” 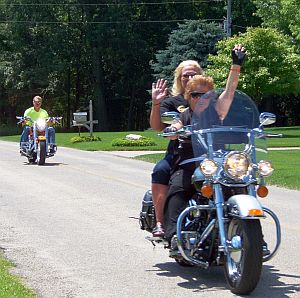 Maddox said there are a few T-shirts with a unique design from I.E. Graphics on them for sale by calling the United Way office.