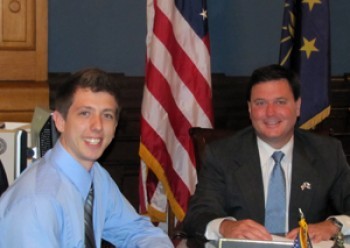 Indiana Secretary of State Todd Rokita is pleased to announce that Tim Coxey of Bremen is currently completing his office’s 2010 Help America Vote Act (HAVA) Internship Program. The summer-long program selects a college or university student from around the state and allows them the opportunity to experience state government first-hand through the Secretary of State’s office.

“Tim has an extraordinary amount of dedication and drive and I feel that will help him to guide our state and country in years to come,” said Secretary Rokita. “He embodies the type of distinguished students we have here in Indiana and I’m thrilled to have him be a part of our HAVA team, as he is a valuable addition.”

Coxey is currently pursuing a degree in Communication with an emphasis in Public Relations and is minoring in Political Science. He is vice president of UIndy Public Relations Student Society of America (PRSSA), firm director of the UIndy student-run public relations firm “Top Dog Communications” and also participates in the Campus Program Board and speech team.

Coxey has learned how HAVA plays a major role in Indiana elections and has helped prepare for outreach events throughout the state, leading up to the November elections.

“This internship fits with my interest in government communication and offers limitless networking opportunities,” Coxey said. “I am also learning a tremendous amount of how voting and elections shape our state.”

For the remainder of the internship, Coxey will continue to help drive voter education statewide and have the opportunity to meet with other elected officials.

“Working in state government can be very fulfilling when you consider how your role affects all citizens across Indiana,” Coxey said. “As far as the communications side of my internship, I know I can play a vital role in the political process by disseminating information and messages between constituents and legislators.”

A 2007 graduate of Bremen Senior High School, Coxey is the son of Thomas and Wendy Coxey. He will graduate from the University of Indianapolis in May of 2011 and plans to pursue public relations work for various agencies or elected officials.