Plymouth Man Struck by Van at Center and Jefferson Streets 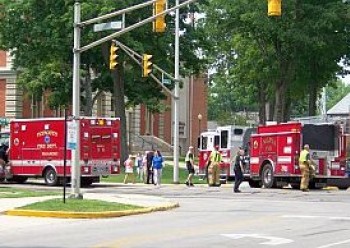 Friday afternoon at 2:55 Plymouth Police, Fire and EMS responded to the intersection of Center and West Jefferson Streets for the report of a pedestrian being struck by a vehicle.

The accident occurred when 73 year old Robert E. Dixon of Plymouth failed to yield the right of way to 53 year old Orville Pitts Jr. as he crossed the street.

Officer Derek Workman was the investigating officer and obtained video from the Court House that showed the accident happen.  In the video he can see Mr. Pitts wait for the east and west bound traffic on Jefferson Street to get a red light.  Once the traffic is stopped Mr. Pitts began to cross Jefferson Street in the crosswalk.  He had taken approximately 9 to 10 steps when he was struck by a 2001 Ford Econoline Van. 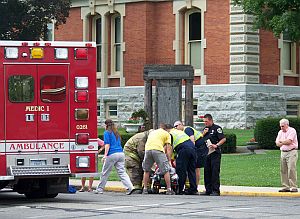 Mr. Pitts was lying in the roadway complaining of pain to the entire body.  He was transported to Saint Joseph Regional Medical Center in Plymouth for treatment of his injuries.  Officer Workman’s report indicates that his injuries were non-life threatening. 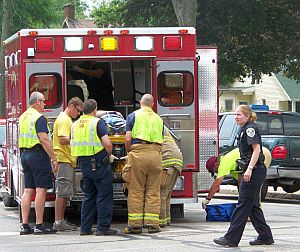