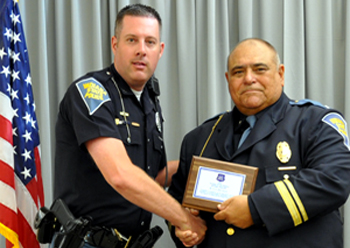 The Indiana State Police held its annual awards and recognition ceremony last Friday, June 11, in Indianapolis. The ceremony honored and recognized individuals from around the state for their dedication to service, bravery and devotion to the department and the citizens of Indiana.

The “Trooper of the District” was selected by the command staff from each of the state police districts across Indiana.  Factors district command personnel used to determine the Trooper of the District included, but were not limited to, traffic and criminal enforcement, community involvement and specialty assignments, instructor ratings, or other services performed for the department beyond normal expectations.

Trooper Kyle Dukes received the “Trooper of the District” award for the Bremen Post this year for his outstanding service to North Central Indiana in 2009.  Dukes has been an officer with the state police since 2000.   “Kyle Dukes embodies the true definition of a trooper,” commented Lieutenant Brad Weaver, District Commander of the Bremen Post.  Dukes primary patrol assignment includes Kosciusko County and he resides in Milford.

Life Awards were also presented to the trooper of each district with the highest annual total number of impaired driving arrests.  Trooper John Wilson received the Life Award for the Bremen District for his commitment in removing impaired drivers from Indiana roadways.  Wilson has served the state since his appointment in 2007.  Wilson, who is currently assigned to the Bremen Post DUI Task force, made 84 DUI arrests in 2009.   Wilson lives in Bourbon in Marshall County.