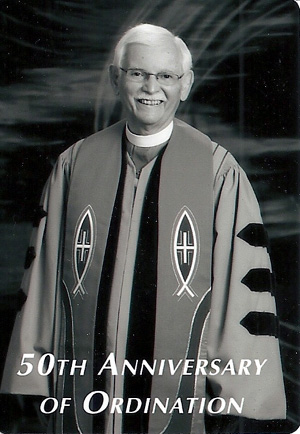 The Reverend Dr. Ronald W. Liechty will be celebrating his 50th anniversary of ordination with an open house  this Sunday, June 13th from 2 -4 p.m. in the First United Church of Christ Fellowship Hall.

The public is invited to honor Rev. Liechty for his years of service and dedication, not only to God and the church, but also to this community.

A South Bend native, Dr. Liechty came to Plymouth in January of 1983 as the pastor at First United Church of Christ where he served until June of 1998 and where he remains Pastor Emeritus.

During his tenure the church built the addition which includes the Fellowship Hall where the open house is being held.

Pastor Ron has been actively involved in ecumenical ministry and in community organizations throughout his ministry, and especially over the last 27 years since coming to Plymouth.  He has been a member of countless community boards, and still chairs three – the Marshall County Historical Society, Garden Court, and the Community Resource Center.

Ron Liechty has received numerous awards through the years including being inducted into the Pioneer Hall of Fame by Indiana Church World Service, receiving the Community Spirit Award from Saint Joseph’s Medical Center, and accepting a Distinguished Service Award from the Plymouth Community Schools.  He has been the Chamber of Commerce Distinguished Citizen of the Year (2003) and their Volunteer of the Year (2007).  In 1998, Governor Frank O’Bannon conferred on Dr. Liechty the highest honor an Indiana citizen can receive for public service – The Sagamore of the Wabash.

The family hopes that friends will stop by the church at 321 North Center Street between 2 p.m.  and 4 p.m. on Sunday afternoon to greet Ron Liechty and congratulate him on this milestone in a life dedicated to ministry.