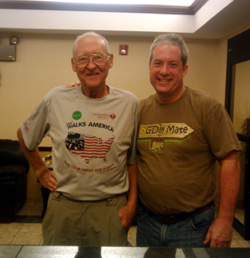 High on John Wraight’s “Bucket List” is to convince people  that walking is good for you and, at the same time, to raise money for the American Heart Association.

Crazy as it may sound, John, at 72-years-old, is working on walking across America.

“I’m going on the America Discovery Trail,” he said.  The nation’s first coast-to-coast non-motorized trail, it’s about 5,057 miles across, stretching from Delaware to California.

He hoped to do it in two or three segments but reality has set in and that has changed.

He left on  April 27th for the first leg of the trip. John walked from the coast of Delaware through the top of West Virginia before his grandson had too many blisters and his faithful companion, Shelly, his dog required transportation back home. John Wraight hopes to finish the trip but will do it in many more segments. The reason?  Doctors believe John may have contacted Lyme Disease.  He said in a phone interview that he has pulled five ticks off himself during his travels so far.  He was walked about half way across Indiana and plans on hitting the road again in a few days to finish off Indiana.  Later this month John will continue his journey.

He has a fierce determination streak that, at the age of 42, propelled the 1955 PHS graduate, after spending five years in the United States Navy, to Ancilla College to earn an Assoc. of Arts degree and to IUSB to finish a Master’s degree in Secondary Education.

A former accountant and salesman, he went into construction and ran his own business for 14 years before going to work as a building supervisor for Construction Management & Design.

He is an active member of St. Thomas’ Episcopal Church, having made four mission trips to Honduras and a couple more to Haiti.

John was inspired to “ take his heart for a walk,” when he met Phil Koeghan of the CBS TV show, Amazing Race, who rode his bicycle coast to coast. His own physical condition played a large part in his decision to get out of his comfort zone and get moving.

In 1998, John had a cardiac imaging test that warned him of a short term risk of sustaining a cardiac event.

He ignored the diagnosis even though he had a family history where cardiac and vascular disease claimed many lives prematurely.

Add to that, he was too fat.

In 2005, he had another complete physical.  The findings were pretty much the same.

This time around, probably more scared than anything else,  determined to change his fate, John took note, watched his diet, lost 30 pounds and started a walking routine.

At first he went only a few blocks, working himself up to three or four miles a day.   He ran in the 2006 Blueberry Stomp and began to run in other races around the Midwest, including several Sunburst events.

2008 brought on more races and many mountain hikes on Arizona trails.

In 2009, he had two knee surgeries.  That slowed him down on running, but he still jogs a little and usually walks 3 to 4 miles prior to breakfast and on most days, walks more miles later in the day.

Other folks’ lame excuses as to why they don’t walk for their heart pales in contrast to this fit-looking man.

Not withstanding, John has some degenerative disk problems in his spine and continues to have knee, hip and leg pains along with the back pain.

He, however, continues to walk. And walk.  And walk.

John said, “the pain is there no matter what I do: it is there sitting, lying, standing or walking.  I do my heart and vascular system a big favor by taking them for a walk every day.  I look forward to this part of my day and am greatly disappointed if weather or some other event precludes my morning walking ritual.”

It’s been five years now and walking has done wonders for John.

He wants to share his good fortune by helping others become aware of the benefits.

A talented photographer of wild flowers growing all over the country, his digital camera will be put to good use.

To become a sponsor and partner in his walk, John asks that donations to the American Heart Association be sent to: michianaheartwalk.kintera.org/johnwraight.  You can follow John’s journey across America  on his blog: johnwraight-walkingfortheaha.blogspot.com