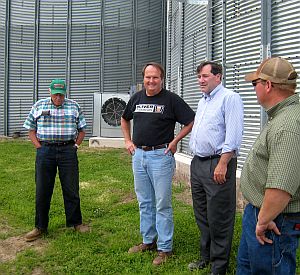 On Friday, Congressman Donnelly continued his all-American energy jobs tour by visiting The Andersons Clymers ethanol plant in Logansport and the Bill Vories’ Farm in Argos.  The Vories’s farm in Argos supplies corn to the Logansport ethanol plant.

Congressman Donnelly discussed his support of the Renewable Fuels Reinvestment Act, H.R. 4940.  This legislation would extend through 2015 for the most important tax incentives for all ethanol producers and blenders, regardless of feedstock.

Last week Donnelly spent time at Jordan Ford in Mishawaka and Indiana Flex Fuels in LaPorte.  He discussed a bill he introduced the week before, The Municipal Fleet Modernization Act, H.R. 5438, which would require that the U.S. Environmental Protection Agency (EPA) update its High Occupancy Vehicle (HOV) exception list annually so local governments have a larger selection of eligible hybrid vehicles to choose from.

At Green ALTURNATIVES, Inc., Donnelly talked about his support of an all-American energy plan, including The American Conservation and Clean Energy Independence Act, H.R. 2227. This legislation promotes responsibly expanding domestic oil exploration and production, and would make investments in alternative energy, energy efficiency, lowering emissions at power plants, and clean water.  The bill would extend tax incentives for clean energy production and energy conservation until 2019 to provide long-term incentives for new investment in clean energy. The American Conservation and Clean Energy Independence Act would add jobs to the American economy without raising taxes or adding to our deficit. 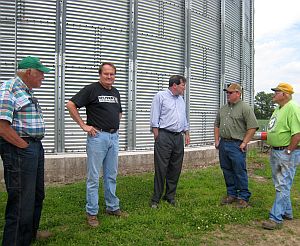 “We all need to be all-in in our approach to the future of America’s energy,” said Donnelly.  “The talented Hoosier workforce has an opportunity to take part in making our energy future more secure, and we’re already seeing our entrepreneurs lead the way.  We need to lessen our dependence on foreign oil, not only for national security reasons, but also to invest American dollars in American businesses.  The businesses I visited are shining examples of what north central Indiana can do.”